Posted on May 19, 2015 by animalkingdomfoundation

It was in the early part of October 2014 that AKF took in 11 euthanasia-bound dogs from the Manila City Pound; they were all malnourished, sickly and looking very dejected and wasting away in the facility.

After five months of TLC at AKF centre, they have now found new loving homes chosen for them by AKF. The event was co-organized with the Manila City Veterinary Office last February 26, 2015 and they helped AKF find and chose loving folks for the A’s. So long, lovely friends, see you sometime 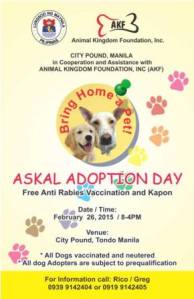 Adoption Poster of The A’s

The rest of The A’s found loving homes.

This entry was posted in Halfway Home -The Dog Pound Project. Bookmark the permalink.