Posted on December 14, 2015 by animalkingdomfoundation

the uninitiated who discovers that dogs in the Philippines are slaughtered and sold for human consumption they probably think the country lacks regulations on animal welfare.  Although only small groups of Filipinos eat dogs, an estimated less than 1% of the 98.3 million of the whole population, there is already an existing law on the treatment of animals in 1998 (RA 8485). In fact, its capital city, Manila, prohibits the killing and selling of dog meat earlier than 1982 (MMC ORD 82-02).

There is an exemption in the Philippine Animal Welfare Act of 1998 that says dogs can be slaughtered over a ritual sanctioned by its local leaders, Section 6, Paragraph 1 of the act says,

When it is done as part of the religious rituals of an established religion or sect or a ritual required by tribal or ethnic custom of indigenous cultural communities; however, leaders shall keep records in cooperation with the Committee on Animal Welfare. 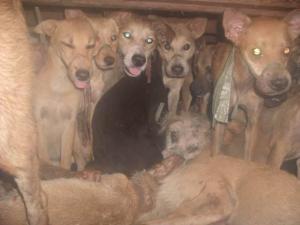 In the Cordillera highlands, a family dog is viewed to have the purest spirit and once offered to the gods – slaughtered and eaten by each family member – will protect a family from further bad luck. As explained in an online article by Dr. Nestor Castro, cultural anthropologist and chairman of the University of the Philippines’ (UP) Department,

“It has become a market (dog meat eating), and has really transformed from its original roots,” he said, emphasizing that not all Filipinos eat dog meat and that it’s an inaccurate stereotype to say otherwise. Mr. Castro added that originally dog meat was used as food for certain type of rituals and special occasions. Locals in the Cordillera Region of Northern Luzon, he noted, slaughtered dogs only for ritual occasions. “Generally, all animals there, not just limited to dogs, are sacrificial animals. Chickens, pigs, or carabaos are butchered, whether for someone who died or for a celebration. The dog goes into that picture, as a special occasion food.” He added that the offering of one’s own could be the ultimate symbol of sacrifice. “I would say, if you treat your dog as your best friend, therefore, to sacrifice your best friend must be really special.”

A predominantly Catholic country, at least 75 million Filipinos, rites to partake of the host, symbolically that of Jesus Christ’s body, is a sacred practice in the Philippine churches hence the providing of exemption for the highlanders on their own cultural belief.

The commercialization of the dog meat mushroomed in the lowlands of the Cordilleras, north of Luzon. Prior to the campaign of Animal Kingdom Foundation (AKF), the market of Baguio City, capital city of Benguet province of the Cordillera, openly sells dog meat until 2012. Restaurants sell the dog meat dish. The live dog source comes from the south of Luzon, 8 hrs by land, as the southerners are not known to be dog meat eaters. Livestock traders from the CALABARZON provinces (Cavite, Laguna, Batangas, Rizal and Quezon) included the dog, aside from cattle and goats, as part of the trade in the north where high-valued vegetables and fruits are harvested.

Only Baguio and La Trinidad, its neighboring city, have the mainstream operation of dog meat serving restaurants.

Animal Kingdom Foundation, founded in 2002, has rescued and recovered more or less 7 thousand dogs from the dog meat trade; some lucky to be alive. Presently, there are 250 dogs at the Animal Kingdom Foundation center located at least 3 hrs away by land travel from Baguio City.  As the only official partner of the Philippine government in the campaign against the dog meat trade, AKF has carried out 250 raids.

Animal Kingdom Foundation investigators gather enough evidence on the dog meat trade activities, especially from the south of Luzon, and coordinate with the police for rescue operations. More than 200 cases have already been filed by AKF against the dog meat traders and 80 of them have been meted out sentences.

One has to be part of the raiding team to understand the cruelty inflicted to the dogs. Their muzzles shut tied by strings, their tongues swollen because they have bitten them when their snouts were forcefully tied, dead ones piled up on by the weak ones and the stench, it never leaves you; it is as horrible as the sight before you. Animal Kingdom Foundation almost always bury half of the number of dogs recovered from these raids.

Recently, AKF and the Bureau of Animal Industry (BAI), the government branch that safeguards the welfare of all domestic animals and livestock, and the National Meat Inspection Service (NMIS), the government arm that can stop the dog meat trade signed an agreement that would greatly impact this illegal trade.

This agreement, the National Plan of Action (NAPOA), indicates that the Philippine 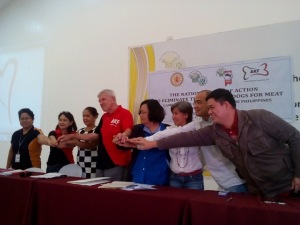 government has officially declared war against the dog meat trade. This illegal practice is now duly recognized as a national issue and so various programs and actions will be integrated into the framework of the BAI and NMIS. Most importantly, monies will now be allocated in each branch and unit of these bureaus to investigate, operate and file cases against the dog meat traders.

Animal Kingdom Foundation is greatly involved in all of these undertakings. It has been a long road from the conception of the NAPOA for AKF and the BAI and it is through the support of our donors that we were able to finance the mobilization of this idea. The proposal was laid down not only to the national office of the BAI but also to all its regional and provincial officers. In fact, the drafting of the NAPOA was held in Baguio City last July 2014 with the participation of all the national units of the BAI. Animal Kingdom Foundation provided input based on its incomparable experience in the campaign against the dog meat trade.

The year 2016 is the official target in ending the selling of dog meat from a bigger to smaller scale; known source going to its market and the operation of small roadside restaurants plus personal consumption. 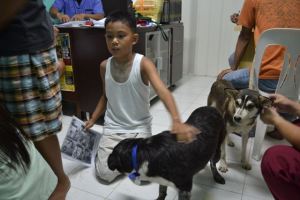 This year, 2015, AKF has so far rescued one dog and recovered approximately 20 kilos of dog meat from three separate operations.  It has become difficult to trace the dog meat traders but Animal Kingdom Foundation is relentless in pursuing them.

AKF is now drumming-up support for the effective implementation of the NAPOA. Since the very start, it has always been the partnership between the supporters/donors and AKF that made possible the mobilization of its programs and projects. You can support the NAPOA through this link: https://www.generosity.com/fundraisers/to-end-the-cruel-dog-meat-trade/x/12583969 or visit our Facebook account: https://www.facebook.com/akfuk