Posted on May 21, 2015 by animalkingdomfoundation

Once again, AKF partnered with a local government to give some extra TLC to the askals. On the 26th of February 2015 at Tondo, Manila more than a hundred dogs were given enormous relief from the shackles of their rusty, tight and, imaginably, painful collars.

At least 20 pets (cats and dogs) were neutered for free and given extra vitamins and medicines and a total of 230 of them were vaccinated against rabies.

A government vet giving a pet a free anti-rabies shot. 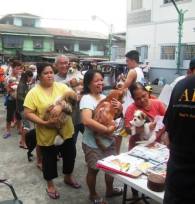 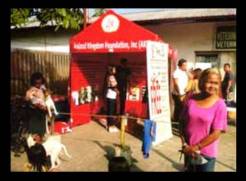 Posted on May 19, 2015 by animalkingdomfoundation

It was in the early part of October 2014 that AKF took in 11 euthanasia-bound dogs from the Manila City Pound; they were all malnourished, sickly and looking very dejected and wasting away in the facility.

After five months of TLC at AKF centre, they have now found new loving homes chosen for them by AKF. The event was co-organized with the Manila City Veterinary Office last February 26, 2015 and they helped AKF find and chose loving folks for the A’s. So long, lovely friends, see you sometime

Adoption Poster of The A’s

The rest of The A’s found loving homes.

Posted on May 18, 2015 by animalkingdomfoundation

The second batch of dogs to be taken in by AKF from a possible euthanasia are ten unclaimed dogs, 6 males and 4 females, from the Angeles City Pound in Angeles City, Pampanga on February 12, 2015.

One of the female had given birth to six puppies at the facility and was in dire need of a bigger and better space. Bonnie aka “Mommy dog” and her 3 male and 3 female puppies got a full kennel for themselves which can house more than 15 adult dogs. 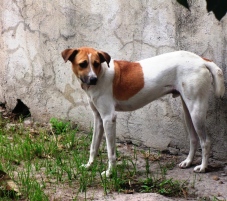 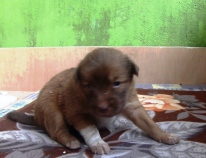 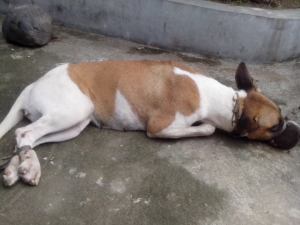 Tightly-bound and ready to be slaughtered. This poor dog was rescued in the nick of time.

Posted in Uncategorized | Leave a comment
Posted on July 19, 2014 by animalkingdomfoundation
News

Campaign Against the Trade of Dogs for their Meat July 3, 2014

The Philippines is set to be the first country in Southeast Asia to denounce the trade of dog meat for human consumption.

In a forum in Baguio City, a national plan of action towards a dog-meat trade free Philippines was crafted to indicate the government’s stance against the trade. The city, known for its tolerance for dog meat consumption, was chosen to instill further awareness against the practice.

The plan of action will be spearheaded by the Department of Agriculture’s Bureau of Animal Industry (BAI) in partnership with the DA-National Meat Inspection Service (NMIS), the Department of Interior and Local Government (DILG), and the Animal Kingdom Foundation, Inc., a non stock and non-profit NGO.

The forum, July 3-4, is an offshoot of last year’s celebration of World Animal Day in Manila, where commitments were made among various agencies to stop the trade of dogs for their meat.

BAI Director Dr. Rubina Cresencio said her office has not only taken seriously the campaign against the trade of dogs for their meat, culminating in the crafting of the National Plan of Action, but also ensured the implementation of programs towards a dog meat trade free Philippines.

The campaign is consistent with the country’s commitments to the OIE, International Animal Health Standards which assists the government’s efforts to come up with an improved animal welfare practices in farms and livestock, the BAI said in a statement.

NMIS Director Dr..Minda Manantan mentioned that “meats from dogs, cats, and other non-food animals as defined under a new law are declared as “hot meat” and are prohibited from sale and distribution.

Charles Wartenberg, President of Animal Kingdom Foundation, Inc., said the recent actions of the Philippine government towards the stopping of the trade of dogs for its meat would be a first in Asia.

Just recently, the Philippines has been criticized for its apparent inaction towards the dog meat trade. Apart from cruelty to these domestic animals, health and sanitation issues linked to the preparation and cooking of the meat were also raised.

Only on June 23, 2014, a total of 12 dogs were rescued by local authorities in San Pedro Laguna. Dead dogs were found and one hanging, already slaughtered. Dog meat are believed to be mixed with goat meat and sold for human consumption.

Posted in Uncategorized | Leave a comment
Posted on July 19, 2014 by animalkingdomfoundation

Baguio City may be known as the country’s summer capital but unfortunately, it is also notorious for being a capital for dog meat trading.

Animal rights advocates in the city expressed disappointment over the lack of implementation of a ban of dog meat trade in the City of Pines.

Animal Kingdom Foundation (AKF) President Charles Wartenberg said that, while the number of dog traders have decreased in other regions, the opposite has been happening in the Cordillera.

Based on AKF’s monitoring, some 10,000 canines were butchered last year, mostly in Northern Luzon and particularly in Baguio City where several restaurants and eateries serve dog meat dishes more popularly known as azucena.

Wartenberg said only indigenous people are allowed to kill dogs for their rituals.

The law includes penalties for the transportation and trade of dog meat, most of which undergo unsanitary processing and storage. – Solar News Online, from a report by JM Agreda

Posted on June 28, 2014 by animalkingdomfoundation

The Animal Kingdom Foundation Inc. (AKF) held a benefit dinner at the Alabang Town Center last June 1, 2014 entitled: Pour L’amour Des Chiens (For the Love of Dogs). The AKF has been sponsoring and caring for abused and maltreated dogs from all over the country and this was one of the many events they have done to promote awareness.

END_OF_DOCUMENT_TOKEN_TO_BE_REPLACED

Posted on June 2, 2014 by animalkingdomfoundation

Posted on April 28, 2014 by animalkingdomfoundation 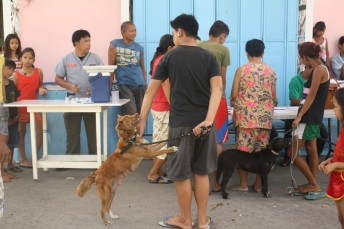 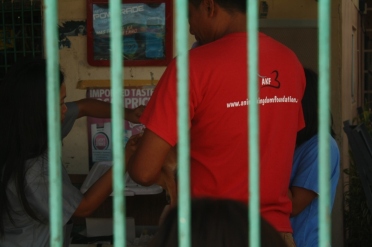 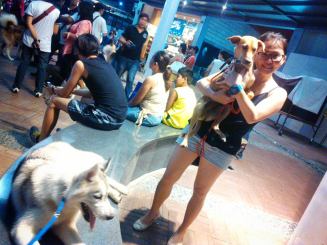 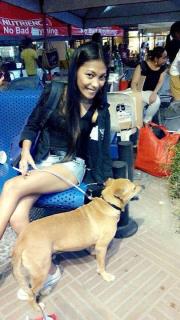 Posted on March 24, 2014 by animalkingdomfoundation